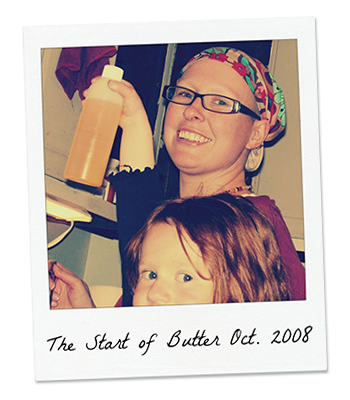 Colorado Springs, 2008. CJ, a typical stay-at-home mom with three children (ages three, two, and almost one), lived a happy full life with her young family. CJ stayed active on different mommy and cloth diaper forums. In addition, she kept busy making and selling products like G-Diaper inserts and her own creation, the Travel Trench.

There came a time, however, when the youngest of the bunch started having problems with diaper rash. Having general sensory issues and sensitive skin, he acquired a severe rash, and the difficulty treating the rash, compounded by the limitations of cloth diapers, left CJ frustrated and worried about her little one's health. Unable to find a product on the market that was safe for her baby's skin, safe to use with cloth diapers, and effective on his rash, CJ began researching ingredients that might work. After trial and error, she came up with the formula that is now known as CJ's BUTTer®. She tried it out, and her baby's rash disappeared by the next morning. That should have been the end of it, but it turned out to be only the beginning. 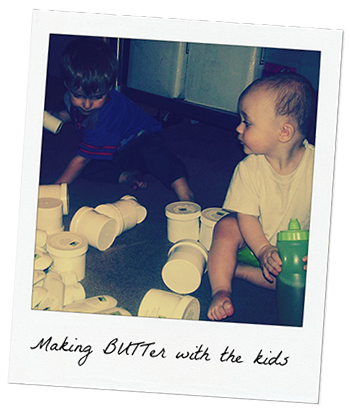 Over the next days and weeks, CJ would meet other cloth diaper mothers in forums and chat rooms that were experiencing similar problems. Thinking nothing of it, she sent her fellow mommas some of her balm, hoping it would help them as it had her. Needless to say, it wasn't long before those mommas started requesting more. As the buzz grew about CJ's amazing product, so too did the requests to try it. Assuming she would be unable to single-handedly supply the entire world with BUTTer, CJ decided she should package it and charge something for it. At some point, she realized she had a business.

As time went by, her customer base and requests from retailers wanting to carry it multiplied. Usually by request from customers, CJ created new products and new options. Steadily the business grew, and what started in her downstairs office nook eventually took over the guest room, the sun room, the shed she had built out back, and the entire living room that had been changed into a full commercial kitchen. CJ's husband, Mark, disenrolled from school and began working with the business full time. Finally, as the boxes started to pile up in the hallways, CJ and Mark moved the business out of their home and officially began this great adventure known as CJ's BUTTer®!

Sometimes people get confused with the size of CJ's BUTTer®. We often get told, “I can't believe you guys make the BUTTer right here?” We are a small team. Everything is made here in good ole' Colorado Springs and is handcrafted from start to finish.

Urban homesteaders with chickens in the backyard and gardens in the front.  Parents of three awesome dogs and three even more awesome BUTTer babies.

When I'm not spending time with my two boys and husband I'm usually on the hunt for trails to go 4-wheeling in my Jeep!

Lost inside the matrix, gadget freak, and all things cool. “It’s through mistakes that you actually can grow. You have to get bad in order to get good.” - Paula Scher